Skip to content
By Spamoman
February 24, 2020
Just when you thought DOOM and Mortal Kombat had solidified themselves as the kings of gorey pixel art, out of nowhere comes Blasphemous, a dark fantasy action platformer. It’s a new game from Spanish developer The Game Kitchen available on PS4, Switch, Xbox One, and PC (Steam). It takes the best elements of Dark Souls and Castlevania and in many ways, one-ups all four of these series. What kind of game is Blasphemous? How could Blasphemous combine all these elements and make it work? Come along and I’ll show why I think this game is deserving of far more recognition than it is currently receiving. When I saw the first Blasphemous story trailer, I thought the pixel art was gorgeous. I was shortly after shocked and disturbed at how detailed the violence and gore could be in a 32-bit setting. It rivals DOOM as one of my favorite graphical styles for shock value. 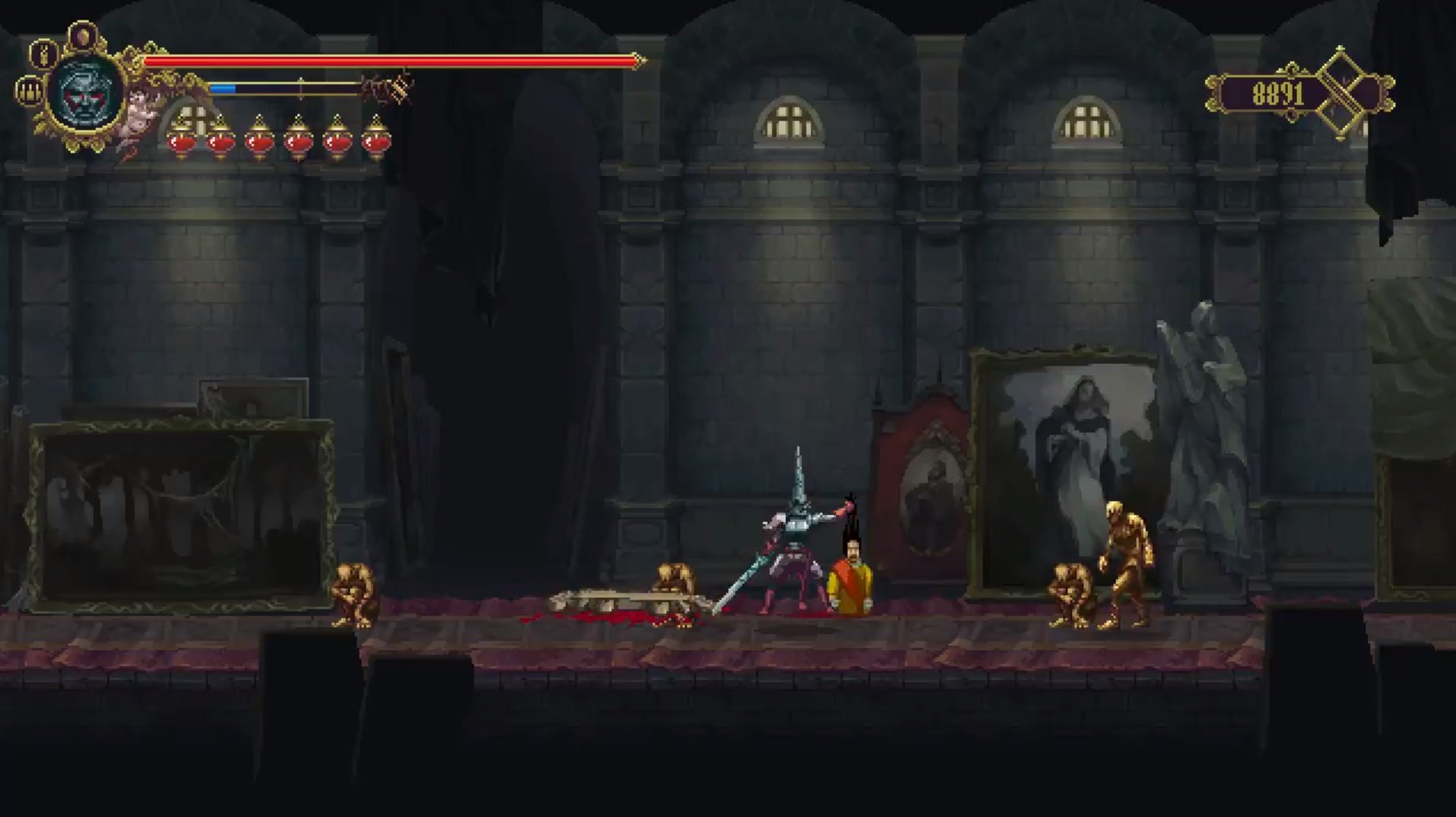 Beyond the visceral thrills of decapitating, impaling, lacerating, curb-stomping bisecting, or otherwise executing your foes, what does Blasphemous have to offer? Blasphemous’s plot revolves around a mysterious, silent protagonist working to atone for his sin. Who is the Penitent One? A badass with a mysterious past who’s willing to dredge knee-deep in the dead to put it behind him. Blasphemous’s lore goes far deeper than this simple exterior, though. As you explore labyrinthine, Metroidvania style areas as this silent killing machine, you find tons of treasures of those gone before you. Some are prayers, used like magic spells in other games. Others are beads for your rosary. These give you various buffs, like other trinkets in an RPG. You can increase your rosary capacity through other collectibles, which makes for a satisfying progression. 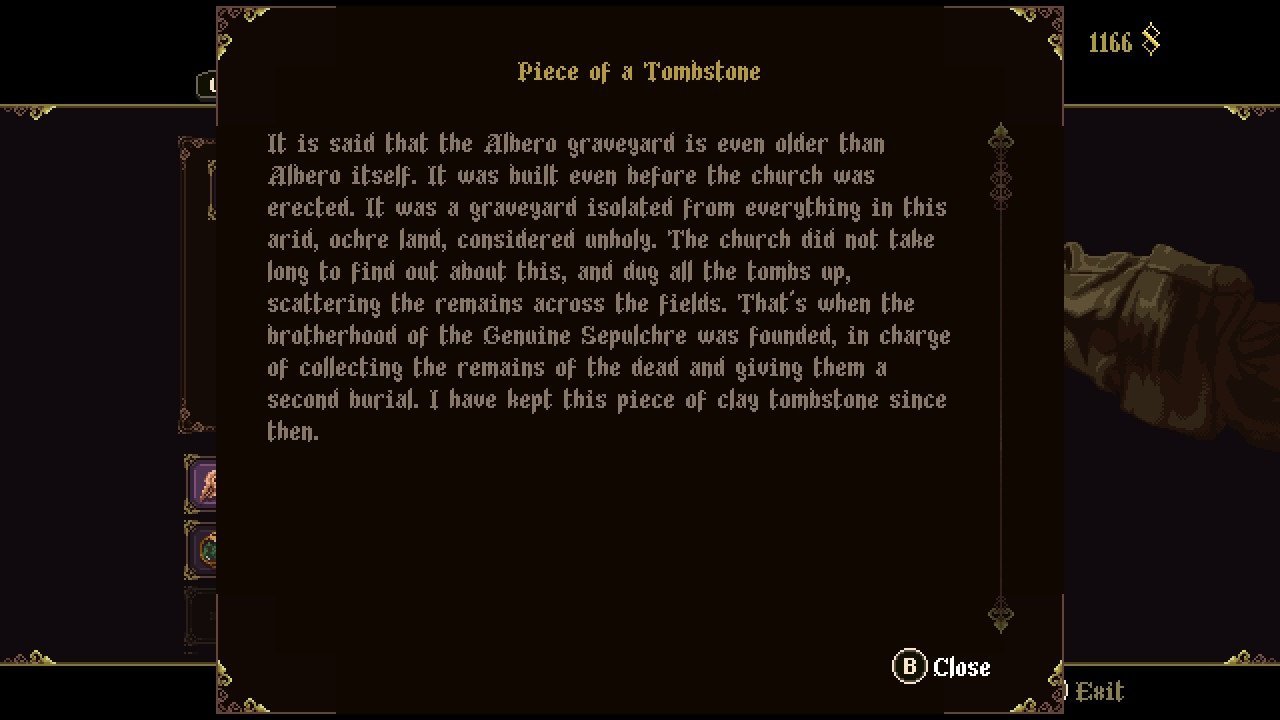 In addition to these and just random collectibles, there are tons of items to find. The best part is that each one has a short description, plus an optional two or three paragraphs of lore stapled onto it. I didn’t think I would spend so much time reading in this game, but it surprised me. Largely the story revolves around a world changing event known as The Miracle. What is The Miracle? Well I’m not a hundred percent sure. I think there was more than one and they were all a little different. Some characters also speak as though it is the name of various deities. This detail being left unclear leads to multiple possible extrapolations, and makes the story all the more intriguing. The deep story is doled out in chunks, and you can only collect all of them through a lot of exploration and puzzle solving. I love this style of storytelling, though I feel I’ve only scratched the surface of what’s going on. It is that kind of story you love just because of how fucked up it is. By giving specifics rather than larger generalizations, the story let’s you find out for yourself what everything is about.

Blasphemous utilizes RPG elements similar to those I have complained about in other games. I feel they are over-saturated in the market today, and many games feel very samey outside of combat, and sometimes within. Blasphemous strikes a perfect balance of customization and simplicity. There is one skill tree, and the abilities are all useful, but it doesn’t feel like there is a “correct” way to build your character. How to upgrade Mea Culpa, the sword of the Penitent One, opens you up to more options much like leveling up. In addition to the skill tree, there are many different rosary beads and prayers to collect, and you can change out powerful abilities on the Mea Culpa itself. It seems on the outside like it might be a lot to account for, but each element only comes up when you obtain a new item to upgrade one thing or the other, and the skill tree remains separate. When actually playing the game, it never gets in the way. 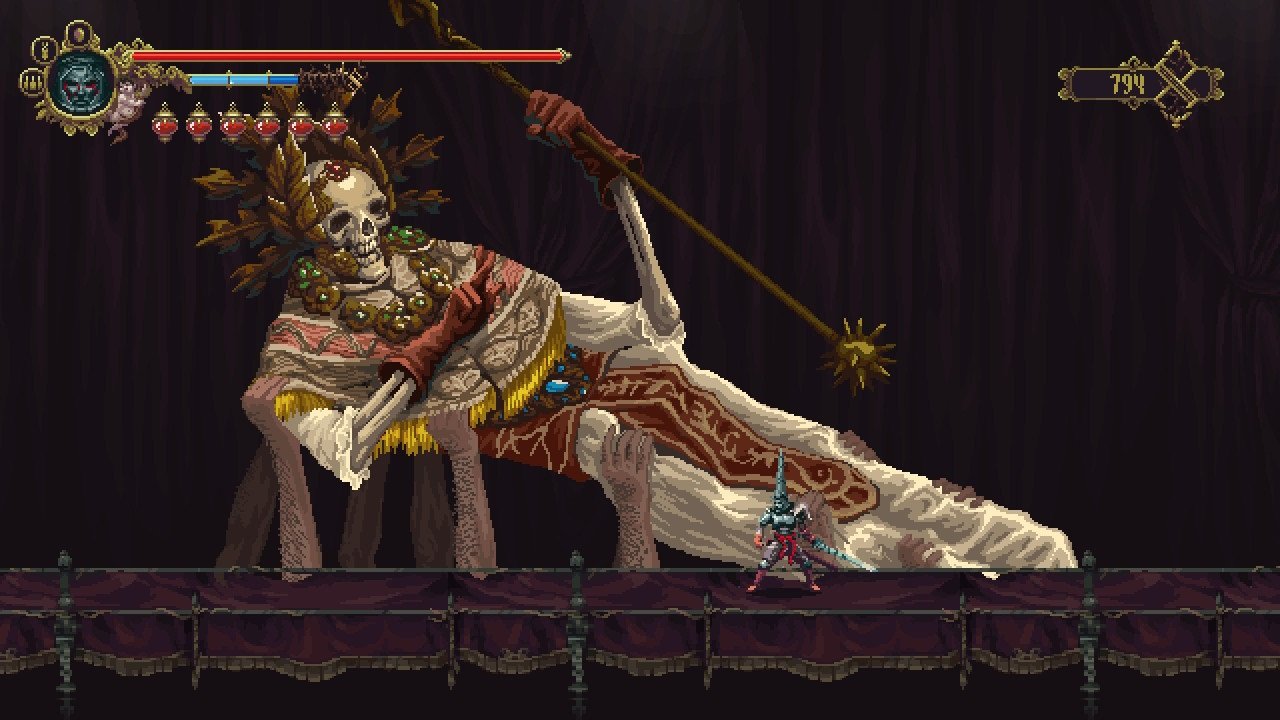 So I made a fairly bold comparison in my introduction. Is Blasphemous as hard as Dark Souls? Perhaps I’m not the best person to answer that, having limited experience with the series. Having played a few hours of Dark Souls III though, I consider them comparable in difficulty. If nothing else the combat style makes Blasphemous difficult for the same reasons as Dark Souls. In both games, the strategy of how to fight particular enemies is what gives the gameplay its signature style. Deciding when to dodge, block, attack, or jump to avoid damage makes every enemy unique. Once you recognize the enemy’s attack patterns and combat style, you find a counter. Rinse and repeat until all your enemies have been vanquished. This is perhaps an odd time to review the game. Blasphemous has been out for several months. Well it was a game I had my eye on for a while, and I finally decided to pull the trigger when Limited Run Games announced the Nintendo Switch physical version. The physical copies for Switch and other consoles were delivered fairly recently. I thought because of this it would be a good opportunity to spotlight this indie gem many may have missed. 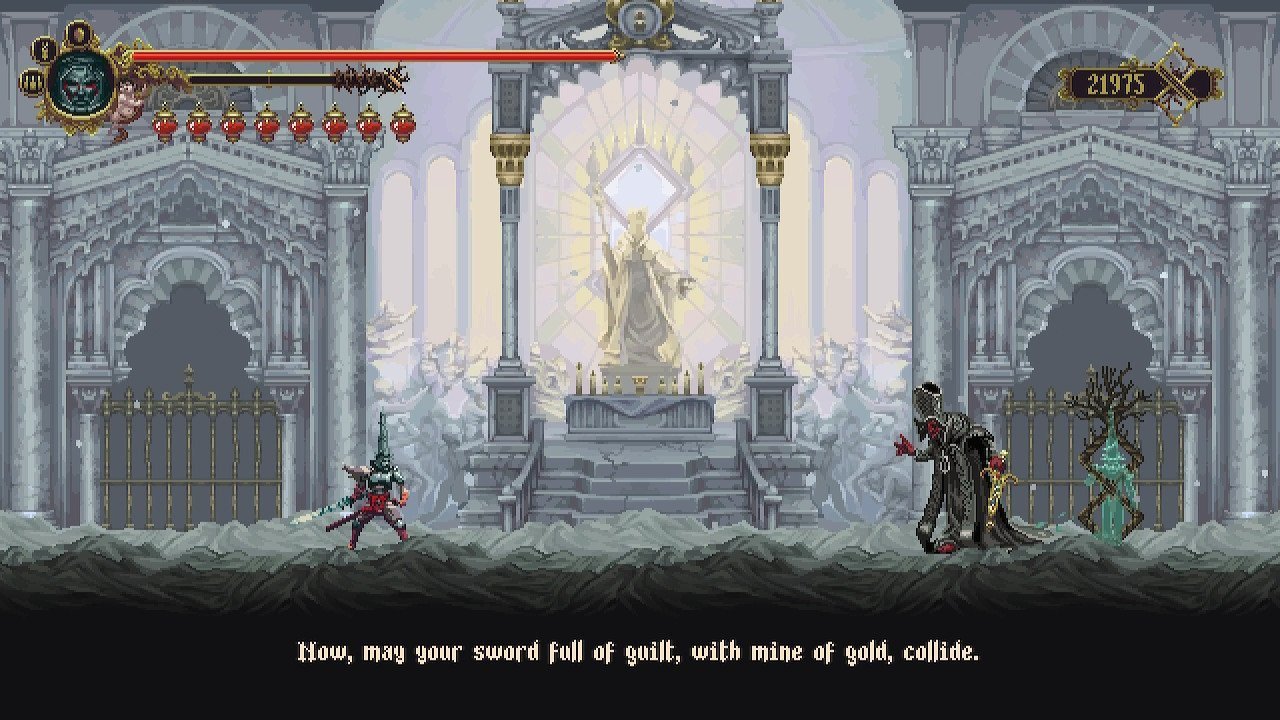 What is Blasphemous game about? It’s a hardcore gore-fest, a deep, lore-laden story, an action game with nigh nonstop thrills, the best platformer since Donkey Kong Country: Tropical Freeze, the best sprite-based artwork I’ve ever seen, and above all combines each of these elements into a package I could not imagine being as good as it is. If any of this sounds appealing to you, you’ll find the other elements merge themselves with it and make a bigger picture that makes you appreciate the parts you might not have cared for by themselves.

That’s it, that’s my spiel. I love Blasphemous, and though we’re only a short way in, it is so far my 2020 game of the year. Have you played it, or are you curious about it? Did I sell you on the game, or are you still uninterested? Let us know on Twitter or the TGPZ Discord and we can keep the conversation jumping!