Skip to content
By Spamoman
November 22, 2019
This year one of the most unexpected announcements for Nintendo Switch, PS4, and Xbox One was made. We were told out of nowhere that suddenly we could relive the glory days. We could play almost every game in the DOOM series right away. This shadow drop was unexpected, but quite welcome to fans like me. To put it simply, I fucking love the gaming icon DOOM. 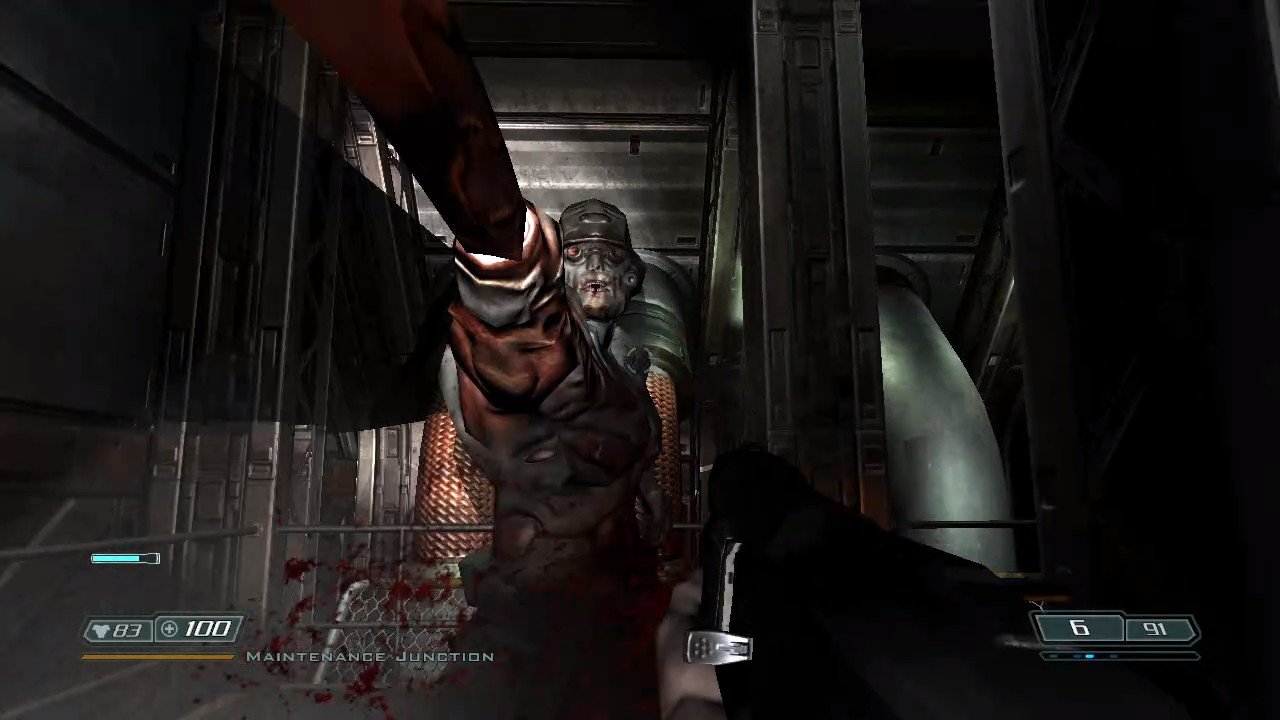 While perhaps it is the black sheep of the family, DOOM 3 is the best DOOM. It holds a special place in my heart. I would go so far as to say this is the best DOOM has ever been. It would be very hard to match going forward. There are quite a few reasons for this, the primary one being nostalgia. This was my introduction to the series. It naturally gets a little extra attention when I’m thinking of the glory days. Luckily the original Xbox release came with DOOM and DOOM 2: Hell on Earth as an extra mode. I did not have to wait long or search hard to see for myself why this was such a beloved franchise. 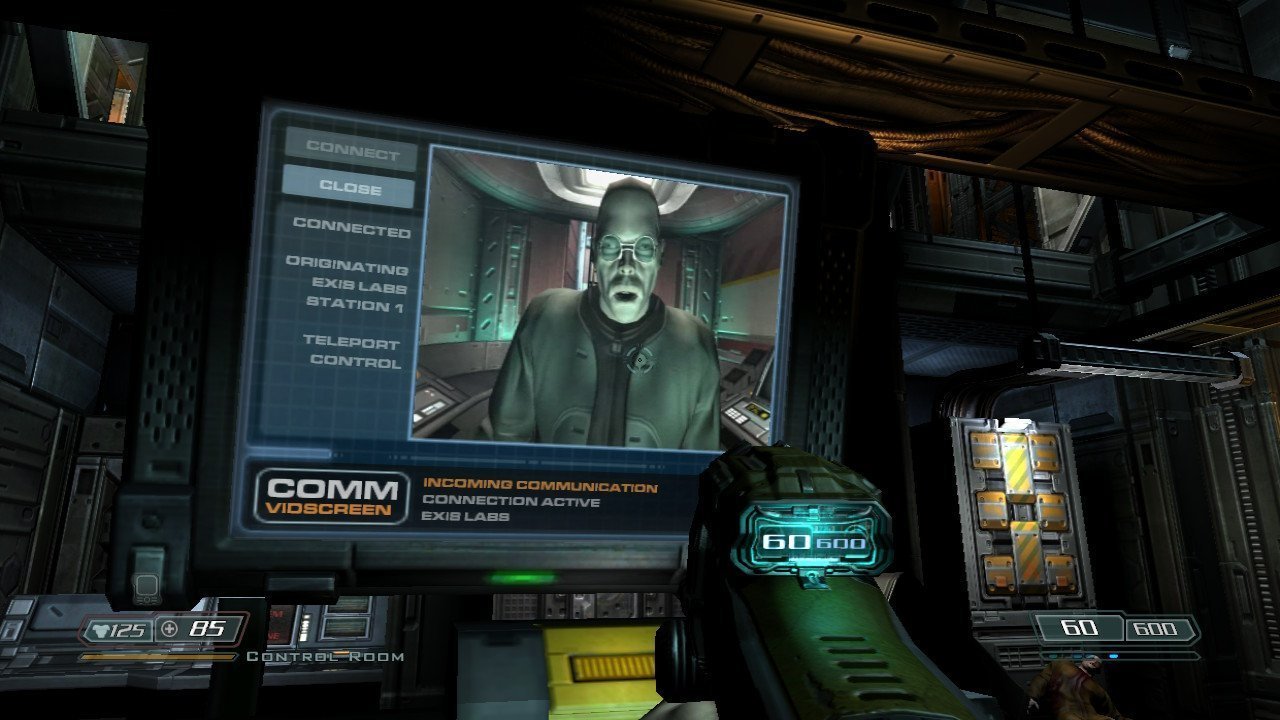 The Nintendo Switch version of DOOM 3 is a re-release of the 2012 BFG Edition remake. It includes the Resurrection of Evil expansion, as well as a series of levels cut from the original game collectively known as Lost Mission. There were a few minor tweaks and graphical improvements as well. At the time it came out, I had the original versions still. I did not feel that I needed to upgrade. Come this year, however, I found the Switch launch was perfectly timed since I had been thinking of replaying this gem. Sadly, I could only find the Resurrection of Evil disc, and didn’t really feel like setting up my old Xbox. In addition to great timing, it also helps that I can take it on the go now. This game is perfect for short bursts or longer play sessions. I have very hectic fluctuations between the two in my schedule. Being adaptive to that was much appreciated.

Why I love Doom 3

So what is it that makes me love this game? Why would I like this game when the critics as well as the masses agree that it feels out of place in comparison to DOOM 2016, which represents the essence of the original games better? I love that this game is the odd man out. While I can’t get enough of the fast-paced, frantic run-and-gun action of the other games, the slower, more horror-driven gameplay found in DOOM 3 is one of the most unique experiences I have ever found. Is DOOM 3 scary? Yeah, it’s scary! 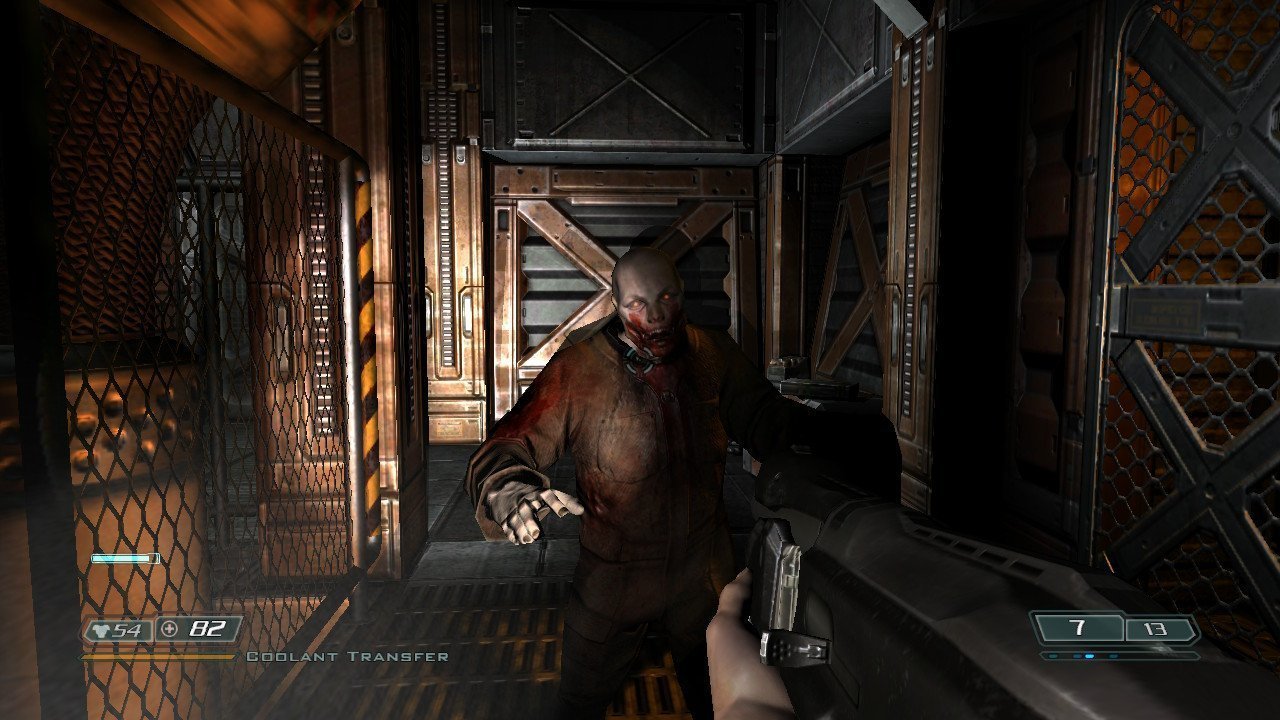 Where the rest of the series relies on fast reflexes, and strategic placements of chainsaw and BFG uses, DOOM 3 makes you take a step back and face the gravity of the situation like none other. Having tougher enemies (DOOM 3 is hard) makes for a more psychological experience. Zombies are usually the least threatening foes in the series. Here they can take multiple shots if you are not precise. Having to repeatedly pull that trigger can wear on you mentally, even if it is just a game. 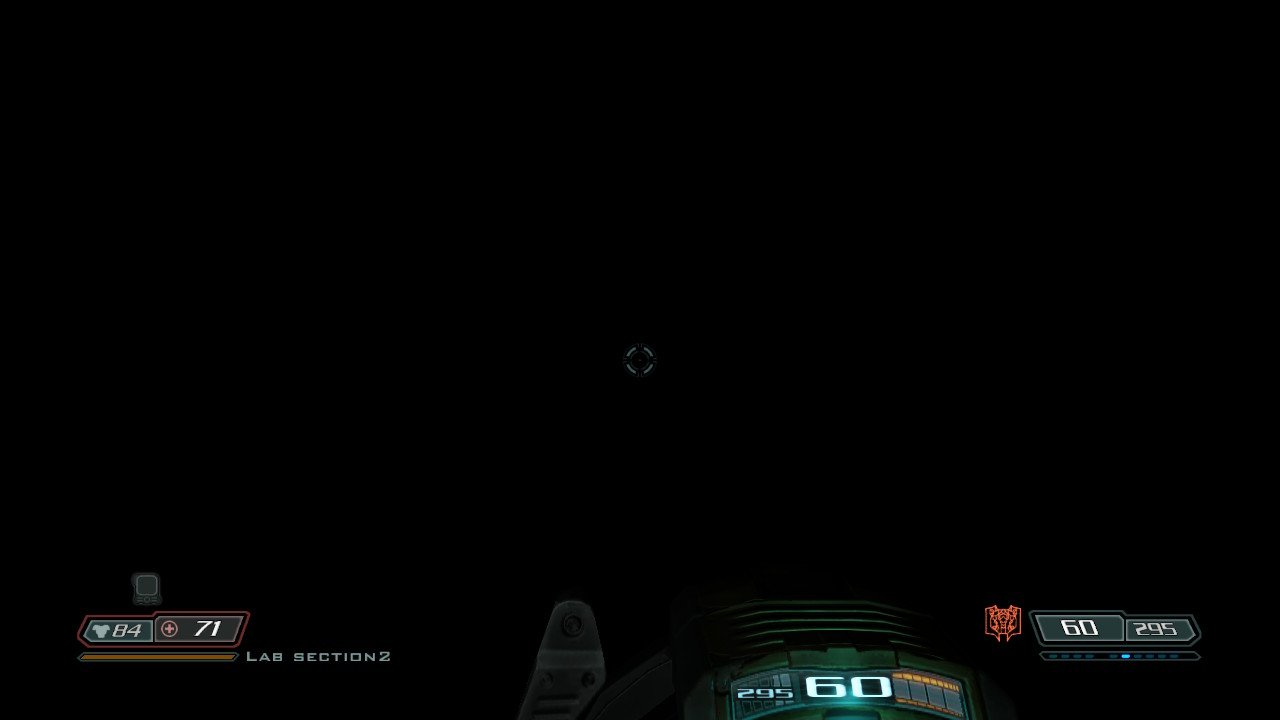 Is It Too Dark?

One of the biggest criticisms this game faces is the question of whether or not it is too dark. I think it is definitely too dark, and I think that is exactly how dark it needs to be. The difference between light and dark in this game is drastic, more so than any other game I’ve played. This becomes a central mechanic, and coupled with the excellent level/map design and enemy placement within, it makes the game even scarier and more intense. 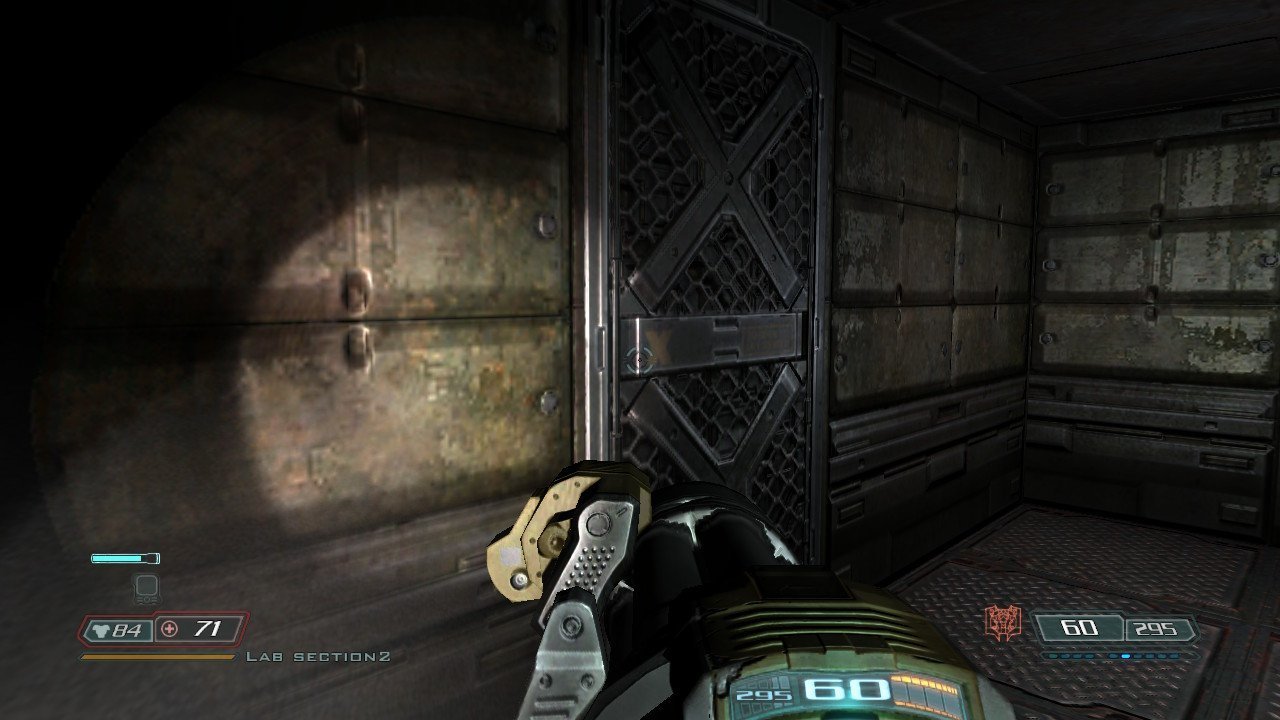 There is of course a cure for the darkness. The UAC was polite enough to give you a standard issue flashlight! Because of this mechanic, playing the BFG Edition for the first time as opposed to the original is frustratingly convenient. Because of the overwhelming darkness in the original version, tension was built by whether you should hold your flashlight or your gun. With flashlight in hand, you could see in front of your face, but your only defense was bashing enemies over the head with your trusty torch. The remade version allows you to see and shoot simultaneously, which seems on the outside like a simple quality-of-life improvement, but it makes the game annoyingly easy. Your flashlight now has a battery meter. It needs to recharge every so often, but it does so quickly enough that it is literally never an issue. Call me old fashioned, but I miss being afraid for my life every second I spend trying to navigate off of muzzle flashes alone, and I miss being afraid for my life every second I spend trying to fight off twelve-foot-tall demons with a twelve-inch-long flashlight. 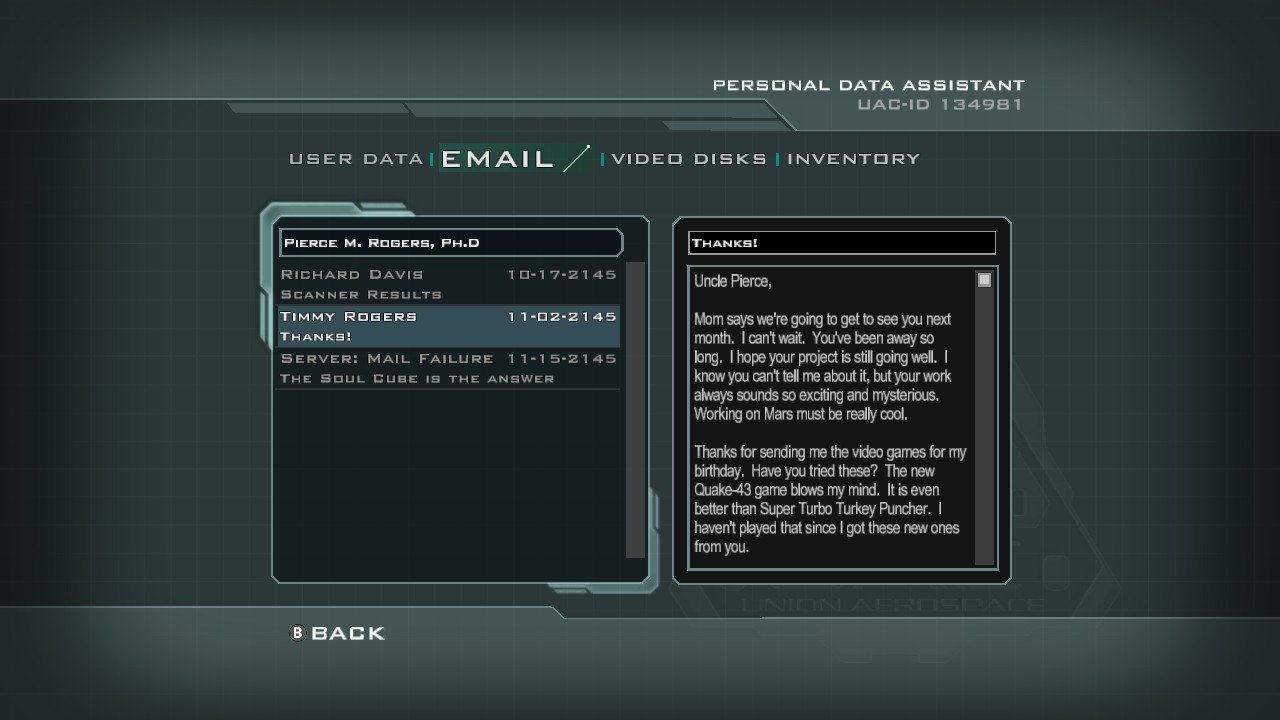 Beyond the blood-pumping thrills, DOOM 3 also shells out a story that no other shooter can compete with short of the original Halo and perhaps Metroid Prime. While simple at its core, the story is fluffed out with tons of unique details on PDAs dropped by researchers on a scientific research outpost when their workplace was suddenly overrun by demons. Often this is just a fun way of hiding codes to open storage lockers full of health packs and ammo, but the audio logs and emails of the staff create a level of world building that is seldom seen. From spam email that may have been corrupted by the hellspawn to employees making humorous remarks about an accidental trans-galactic shipment of fifty chainsaws, it is a joy to go over every little detail and find out more about what was going on before (and during the time in which) Mars went to Hell. 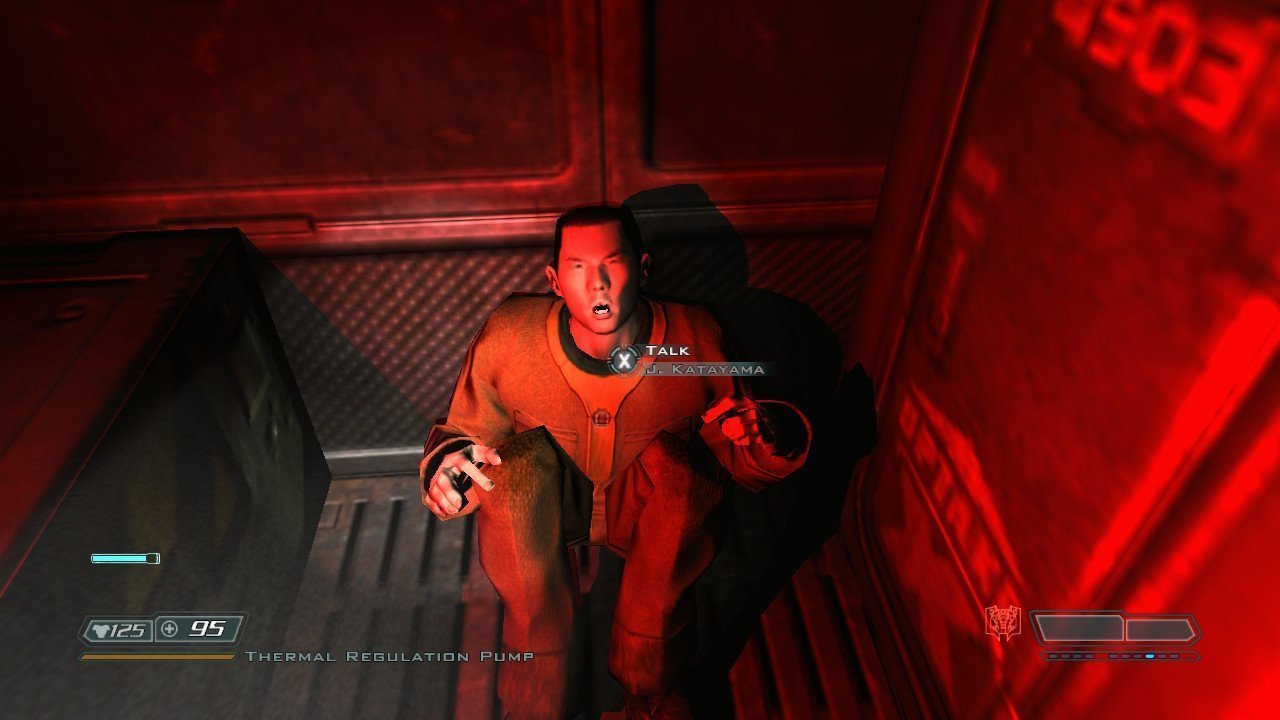 Also worth noting, you would often meet NPCs during the course of DOOM 3 that were actually alive! I did love the feeling of isolationism that DOOM 2016 left you with throughout most of the game, but it felt a little more realistic to meet some random workers from the outpost who had managed to survive in some way or another. Actually talking with people and interacting with them brought another level of horror into the game as you had to leave most of them behind, if not just watch them die. 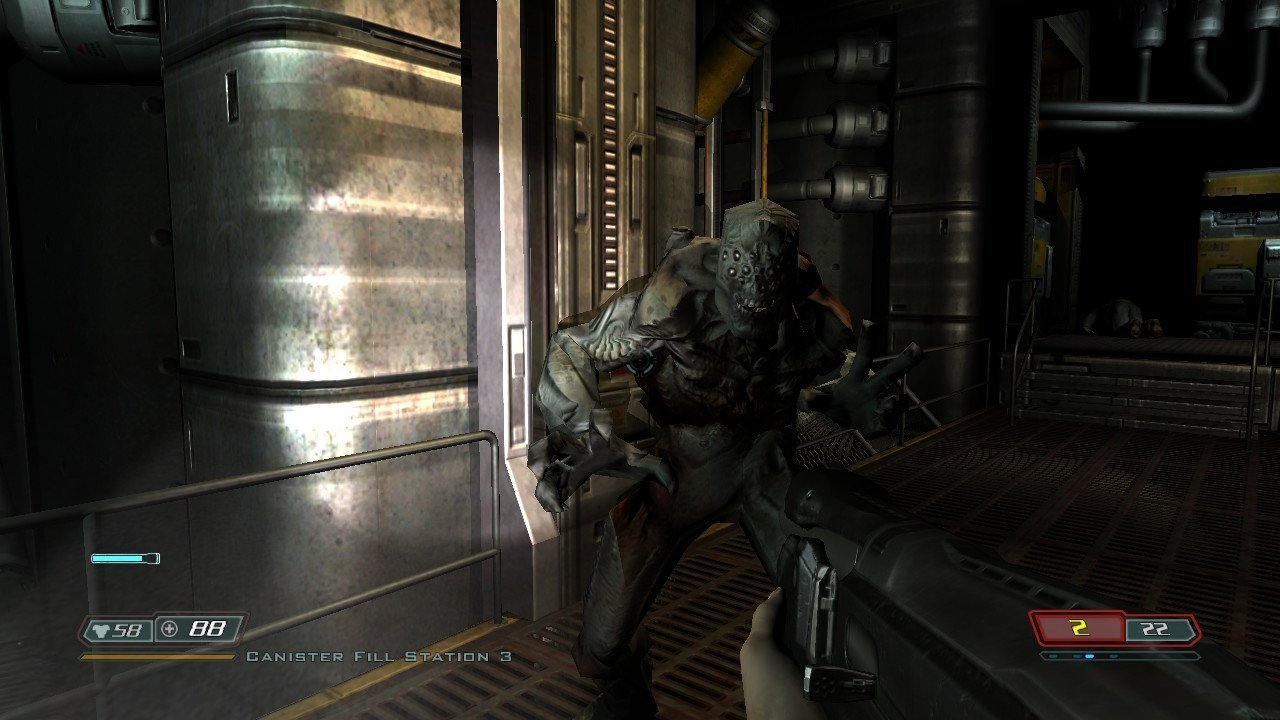 In the end, I agree you get a much more polished game in DOOM 2016, and this game certainly departs from series norms, but nevertheless it is my favorite DOOM, and my favorite horror game. DOOM 3 is awesome! It gets under your skin in all the right ways and leaves an impact like no other. I don’t expect the series to return to this style anytime soon, but this different kind of masterpiece is one of the most exciting games you can get. Ten bucks is a steal, if you haven’t yet, go for it!